Bridging the Gap: The Digital and the Physical

Despite excitement for the metaverse and migration into increasingly virtual worlds, large brands still attribute a majority of revenue to physical goods, which consumers continue to value over virtual ones. NFTs are playing a powerful role in furthering access, provenance, verification, and branding to physical assets.

RTFKT, now acquired by Nike, lead the charge in bridging digital and physical worlds. Here, web3 verification of NFT ownership relies on user-friendly (web2) methods of registration, identity verification, and shipping. Internet-adept consumers will accept layering a web3 element on top of their shopping process as long as the NFT component endows additional benefit: exclusive printing rights (i.e. verifying ownership of an NFT in order to print or display it), physical access to events, or simple monetary upside of owning the NFT.

Rights and licensing are central to content creation, distribution, and monetization. Examples from web3 are asking brands to fundamentally reconsider their historical best practices. CryptoPunks, created by Larva Labs, is one of the largest and most renowned NFT projects. Until March 2022, it had more trading activity and volume than any other project. In March, a defining shift occurred; BAYC “flipped” CryptoPunks and became the most traded NFT in the world.

There are many factors behind why BAYC flipped CryptoPunks, but a fundamental reason is the different approach towards rights and licensing taken by Larva Labs vs. Yuga Labs. Larva Labs retained the IP of their projects like CryptoPunks. This meant that, though many people owned the NFTs, only Larva Labs could commercially monetize any of the 10,000 CryptoPunks. Yuga Labs, on the other hand, took a more liberal approach. If you own an Ape, you have commercial control to monetize it how you wish.

For traditional brands, allowing owners of their goods to commercialize the brand isn’t even a question. The risk that Yuga Labs took, however, paid off tremendously. The network effects that resulted from each BAYC owner having their own commercial rights caused the project to explode. NFTs allow for digital exclusivity that has never before been possible, meaning NFT projects don’t need to worry about the same degree of brand degradation the further the assets travel from the originating entity. Rather, the more community ownership and entrepreneurship taken with the assets, the better for both the entire community of holders and the originating entity.

This approach towards rights and licensing is an entirely different approach to brand success. In BAYC it has proven remarkably powerful, and web2 brands will take a closer look at similar models in future NFT activations. 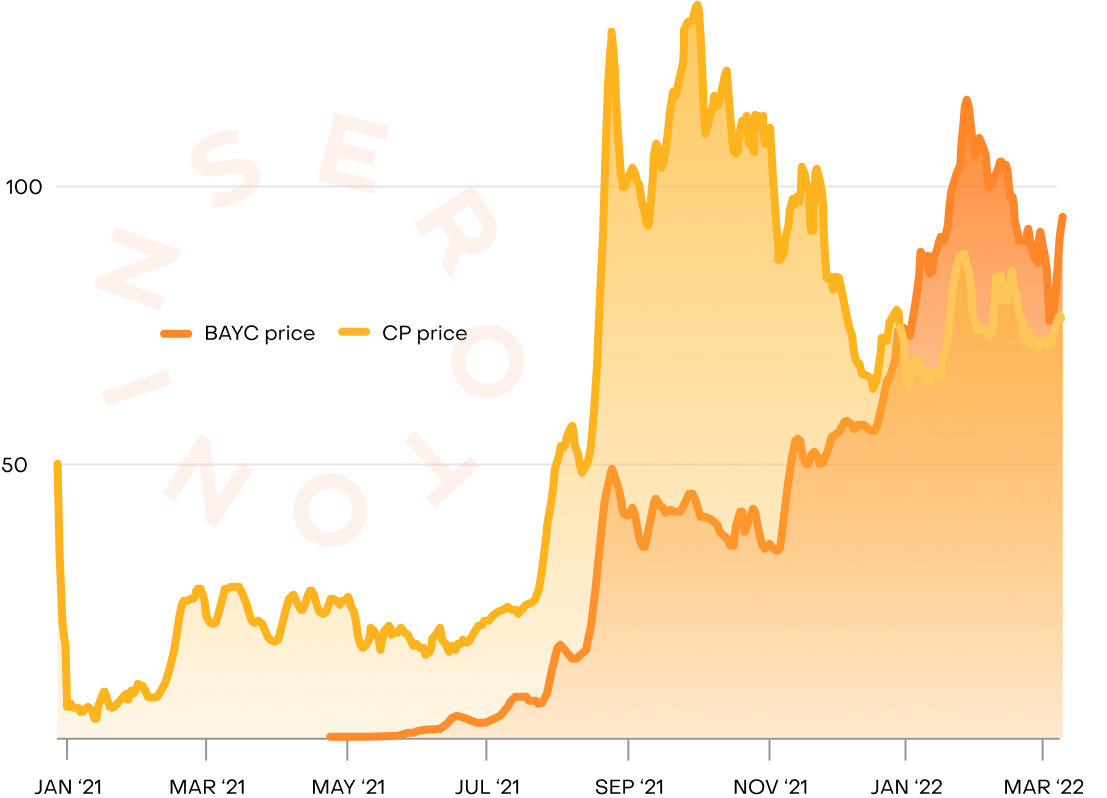 The Blue-Chip Flippening
Maintaining dominance throughout 2021, CryptoPunks ceded ground to BAYC in late 2021 / early 2022 in both floor and median price.
(Source: Dune Analytics)

With any trend, technology, or adoption comes controversy. Blockchain isn’t new to controversy, but the rise of NFTs introduced another wave of criticism directed at the space, its audience, and its impact. Chief among the criticisms towards blockchain and NFTs in particular have been environmental impact, “money grabs” and scams, rights infringement, and the existential impact on artists.

Brands have grown more and more aware of these concerns, and the way they can be marshaled by existing audiences to deliver criticism, harm brand reputation, and impact project performance. One of the most common reactions has been for brands to front run monetary and environmental backlash by either giving away the initial NFT drop for free, or donating anywhere from a portion to 100% of the proceeds. Among the brands that have done this: Asics, Nivea, LFC, Norwegian Cruise, Porsche, DKNY, and more.

Avatars to the Front: (Blue-chip) PFPs

Avatars and pfps remained critical to web2.5 NFT activations across industries. Brands have seen the success of pfp projects like CryptoPunks, Meebits, BAYC, CloneX, and others — and have attached their digital IP to these strong communities. Rather than always trying to launch separate NFT projects and build a web3 community from the ground up, many traditional brands have recognized the network effects that web3 enables, and bring their traditional audience and an existing NFT web3 audience together. As the market continues to identify the strongest NFT communities out there, competition will be fierce among brands attempting to secure partnerships.

Stay up to date with more from Serotonin